While Apple’s event did a decent job at presenting their new flagship iPhone X product to an eager world audience, it left out a few important features that need further examination. Let’s look a bit deeper at the iPhone X and see just 5 of the features that many people won’t have realised it has.

1. Getting Rid of The Notch

The already (in)famous iPhone X notch is a necessary evil. Fancy the new cool Face ID with state-of-the-art infrared cameras? Deal with it, then. At least that was what we’ve been told.

There is, however, a way around it. You see, when you’re watching a video on landscape mode what you can do is re-size the video image a little bit, so that the video doesn’t play behind the notch. This way, it appears as if the notch disappeared into a black frame that surrounds the image. For those of you who are truly that upset about this feature, this is an elegant way to get rid of it for a while.

NFC (an acronym for Near Field Communication) is a way smartphones have to connect via radio waves with other devices in their proximity. The use of NFC started with iPhone 6 models but it was restricted to Apple Pay only. Later on, the adoption of iOS11 further increased its functionality for iPhone 7 and iPhone 7 Plus, but NFC could only be read within an app. However, if you visit Apple’s site these days and check the feature comparison chart, you’ll see iPhone 7 appears as having “NFC”, while the new iPhone X literally includes an “NFC with reader mode”. This could mean NFC full functionalities (like person-to-person Apple Pay) could be available without an add-on in a future upgrade for iPhone X and eventually for all iOS 11 users.

Both iPhone X and iPhone 8 can charge their batteries by 50% in half an hour. That’s pretty impressive, isn’t it? The thing is, that only happens if you use a USB-C charger, as specified on Apple’s own site. Unfortunately, should you choose to utilize the 5W power adapter that comes with your iPhone, charging speed is probably going to be lower. It seems you either put up with longer charging times or you spend a little more money and save your own time. Your choice.

After all this time, the new iPhone X has finally become the first Apple smartphone to include an OLED display. Even though this is great news for all of us fans of rich colors and high contrasts, this feature comes with a caveat: the possibility of burn-ins. This is what happens when an image is displayed for so long it just remains fixed on the screen. This often happened on the older televisions, when you left your games console on ‘pause’ for too long.

You don’t need to worry, though. It seems Apple has included special software to protect the OLED panel from this danger. It’s not still clear exactly how this piece of software operates, but there are reasons to believe that iPhone X’s Truedepth technology is what allows for Apple’s new device to fulfill this task. 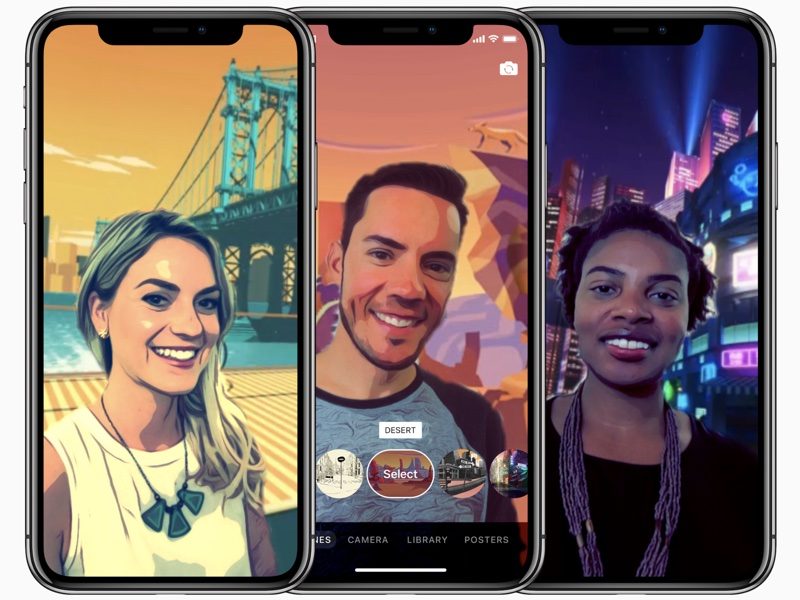 There’s no question the new iPhone X is like a small photo studio you can carry around in your pocket. For instance, its Clip app makes full use of iPhone X’s Truedepth technology once more and allows for you to appear surrounded by amazing 3D, 360° landscapes. It’s enough for you to move slightly and the camera will detect the change and alter your background accordingly. A really cool feature for a truly top-notch device.