Before long, Apple will grace us with yet another new device: the iPhone 8. Set to be released in October of 2017, this model marks the tenth anniversary of the original iPhone. The eighth model will be packed with new features and capabilities. Here, we’ll discuss the rumors concerning the iPhone 8, so that you have an idea of what’s coming up come this fall.

The phone is set to be released in October of 2017, following the planned September 2017 launches of the iPhone 7S and the iPhone 7S Plus. This is a novelty for Apple, which has, since 2012, released its new models of iPhones in September. A launch event held in September will most likely reveal the new phone and the updated iPhone 7s; however, it seems likely that the 8 itself won’t be launched before this unspecified October date. Theorists speculate that, because of alleged production delays, the phone might be released around Black Friday or Cyber Monday.

The screen features an AMOLED display, which allows for higher-quality images and video, with higher contrast levels and brighter colors. It might have a curved shape so that its contents could be seen more easily. Apple might also have built their phone with an OLED panel. This could have the adverse effect of increasing the price by as much as two-thirds since the technology is newer. A rumor also says that Apple has been working on creating a fingerprint sensor that can be built into the screen. 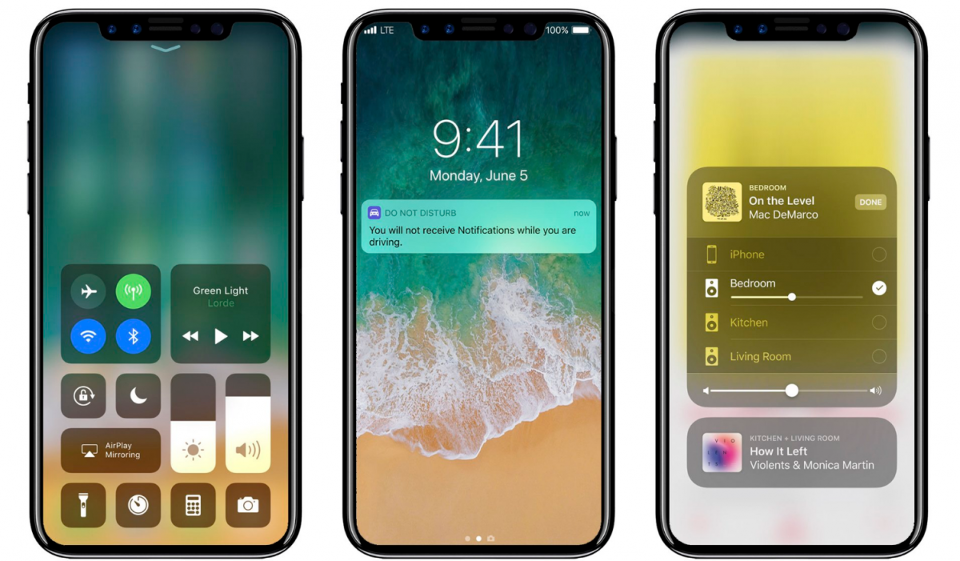 Supposedly, the dimensions are 143.4 x 70.77 x 7.51mm, so it’d be a little bigger than the standard 7 model, but smaller than the 7 Plus, if albeit with a significantly bigger screen (5.8 inches). It also seems likely that, as the premium models begin to emerge on the market, all the models will be of different sizes.

The phone might have an iris scanner, which would take in the “signature” of your eyes as a means of verifying your identity. The scanner might be located in the display instead of on the back. However, it seems more likely that the scanner will actually be integrated into the screen. Further, there might be no bezel on this edition of the iPhone, and no home button.

The back might also be made out of glass, rather than the traditional aluminum, with a metal frame. It’s not clear if this glass back would be for all models, or for the premium one exclusively. It’s entirely possible that the designs of the standard models will remain relatively unchanged.

There are front and back cameras, and the dual-camera lens is vertically oriented. There will also be the capacity for 3D in the cameras.There will be more features for virtual and augmented reality, with AR to be a major part of the new iOS version. For example, if you point your iPhone at an object, the rumors say that the phone will identify it for you. This could potentially help you find your seats in a crowded stadium or concrete hall. The AR will also be able to help you map out your trips and see where you’re headed.

It seems that, at least to some degree, the phone will be able to charge without being plugged in, and will charge quickly. There is space for two batteries, which is ideal because it will help lengthen battery life. The display is always on, but at the same time, it will have been designed in such a way as to always save battery life. Somewhere down the line, Apple might also create a charger that is completely wireless. Although they haven’t reached that step yet, they were working with the company Energous on a technology of this nature.

The 8 will run faster than previous versions. It will have 2 or 3GB of RAM, and a 10nm A11 Fusion chipset. It might keep the quad-core processor of the iPhone 7. The modems might be from Intel and Qualcomm, if Apple chooses to go ahead with dual-sourcing the modem, as they did with the 7. However, Apple has taken legal action against Qualcomm, so they might forgo using their modems. The iOS will be iOS 11, which will have new features, such as improvements to apps like iMessages and Apple Pay. Rumors also say that the 8 might be a bit more waterproof than its predecessors, moving up from an IP67 rating (for protection from dust and small amounts of water) to IP68.

Though we don’t know the price, we can expect to be quite high. Some rumors say that it might clock in at 1000$, which would be a first for an iPhone. Whether this price will come to fruition or not, it is true that the OLED display will drive the price up, since this is a relatively new technology, as will other new technologies like the wireless charging and the potentially curved display.

The iPhone 8: A coming revolution

All in all, Apple lovers everywhere can look forward to this newest model of the iPhone, which promises to bring new features and capabilities to its widespread audience. Stay tuned for more information about the phone over the next few months; surely, the best is yet to come.